Based on a severe recognition that the human intelligence has contributed to the development of a disharmonious Earth Culture in which a majority of humankind suffers, The Planetary Academic Federation was humbly founded in San Francisco, California in July 1999 to establish and support the emergence of a new world standard of academic and educational intercourse. We envision the formation of a global forum and alliance to support and nurture the already self-organizing new planetary culture naturally emerging out of the expanding and awakening consciousness of innumerable human beings across the planet in all cultures at this time.

This opening of the academic alliance as a working knowledge network aims to serve the universal natural law in being revitalized and in exerting its dignity. This represents the continuation of the efforts formally initiated by the participants of the momentous World Summit on Peace and Time which was held in Costa Rica at the University of Peace in June 1999.

The purpose of the Planetary Academic Federation is to gather seminal whole system thinkers, scientists, creative artists and those whose lives and service embody universal spiritual principles in action, into a boundary-transcending alliance that would take for its base of operation the Core Curriculum formulated by the Commission on Education at the World Summit on Peace and Time. This Core Curriculum emphasizes the creative and synergetic inter-relationship of Art, Sustainable Living and Life Skills, Comprehensive Science, Mind-Body-Spirit Synthesis and Cultivation, World Languages, Culture and Spirituality, and Human Evolution (past, present and future) organized around a central axis expressed as Time which (as was made resoundingly clear at the World Summit in Costa Rica) is not linear but is a function and expression of Mind or Consciousness and functions as a central synchronic organizing principle in the universe. The expression of the conscious realization of the primary now-based or radial nature of Time unfolds as Love and Higher Moral Consciousness within us. The Resolutions of the other six commissions of the World Summit on Peace and Time will also provide guidance and a general prescription for the focus of our activities engaged through the framework of the seven-fold Core Curriculum articulated by the Commission on Education. 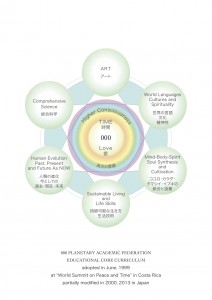 As the restrictive and stifling conditions that the standard academic and educational atmosphere has presented a limit to genuine progressive exploratory discourse for many creative minds, imaginative souls and open hearts; The Planetary Academic Federation intends to initiate a new and revitalized planetary order for academic discourse. Given this, PAF does not advocate or endorse activities that proselytize specific religious doctrines nor does it participate in or support any action that jeopardizes the freedom of individuals to exist within their own belief system. The Planetary Academic Federation intends to maintain a basic respect for the individual’s sovereignty over their own mind. PAF, however fearlessly engages in an ongoing deep consideration of the central role of belief systems in general in shaping the nature of the worlds that we create and live within. Such bold and intrepid exploration of the primary roots of how we individually and collectively co-create our worlds consciously and unconsciously via belief systems is central to and will characterize our activities and inquiry. A recognition of the urgency of becoming conscious of exactly what our individual and collective belief systems are and how they shape our reality is considered central to the furthering of the personal and collective growth and evolution of human consciousness. Bringing an aesthetic to science and education on behalf of spiritual reawakening is a core intention of PAF. The aim of our activities is ultimately, through the development of a planetary matrix for the sharing and cultivation of new thought and ways of being, unhindered by the restrictions that have characterized academic discourse in the past, to support the unfolding on a new sustainable planetary culture of Peace.